Last night, I went to a bar called Vol de Nuit with a friend. I had never heard of this popular West Village hole in the wall, but was thrilled to see they offered every kind of Belgian beer I had tasted during my four months in Europe. They had Palm on tap, which became my go to when I was studying abroad (if I wanted to splurge for something besides Heineken), and they even had beer from the Delirium brewery, which is probably the most famous bar in Brussels. I was NOT a beer drinker before I moved to Amsterdam, but in a country where Heineken costs less than a diet coke, you just gotta assimilate.

The bar itself was very nonchalant…nestled between a 24-hour diner and a vintage clothing store, there was only a sign for the otherwise undecorated storefront. Once you walk in, the whole middle portion of the restaurant is missing its ceiling, so the floor was covered in autumn leaves. This unusually warm November weather made it a perfect place to sit and drink for an evening. It was so crowded, and it was nice to be somewhere with authentic Belgian brews instead of a more trendy Manhattan “biergarten.”

Reminiscing about study abroad is always fun, because it makes me feel worldly and cool, but it’s also incredibly heartbreaking. Living in Amsterdam and jetting off to a new country every weekend was an amazing lifestyle, and I miss it almost daily. I’m continuously grateful to have had the experience, and give thanks that I chose Amsterdam as my home city. I feel like when you miss a place, you tend to romanticize it–something I hope I don’t do with Amsterdam. While of course I remember just how stunning the city itself was, there are small things that I am nostalgic for. Going through checkout at Albert Heijn and being able to answer the cashier in Dutch after weeks of observation; bicycling to class in all kinds of weather; having a stroopwafel with my coffee every morning. I think it’s time to book a trip. 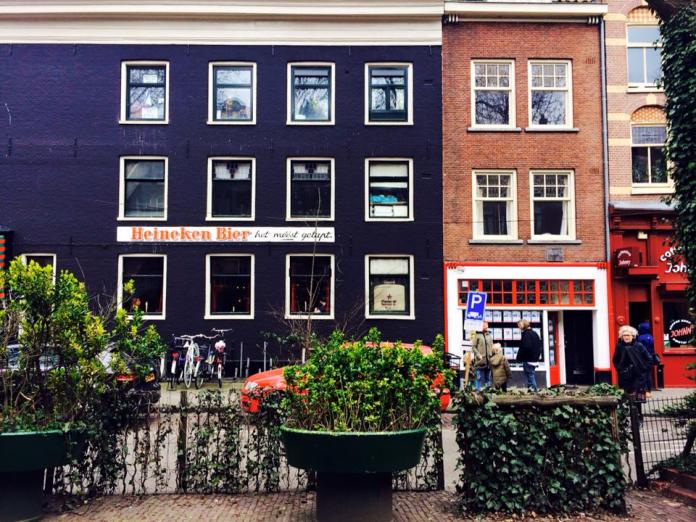 4 thoughts on “belgian beer with a side of nostalgia”